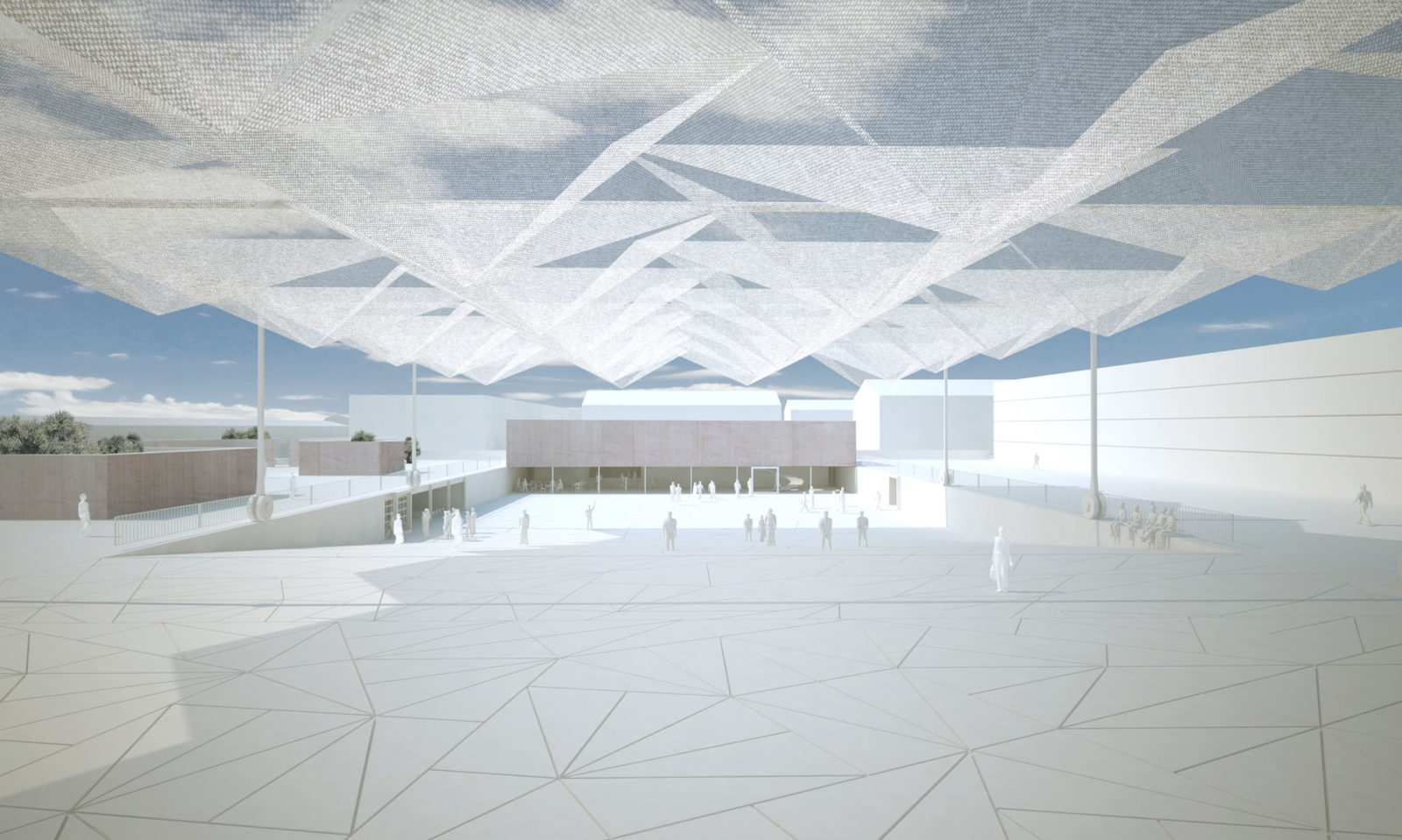 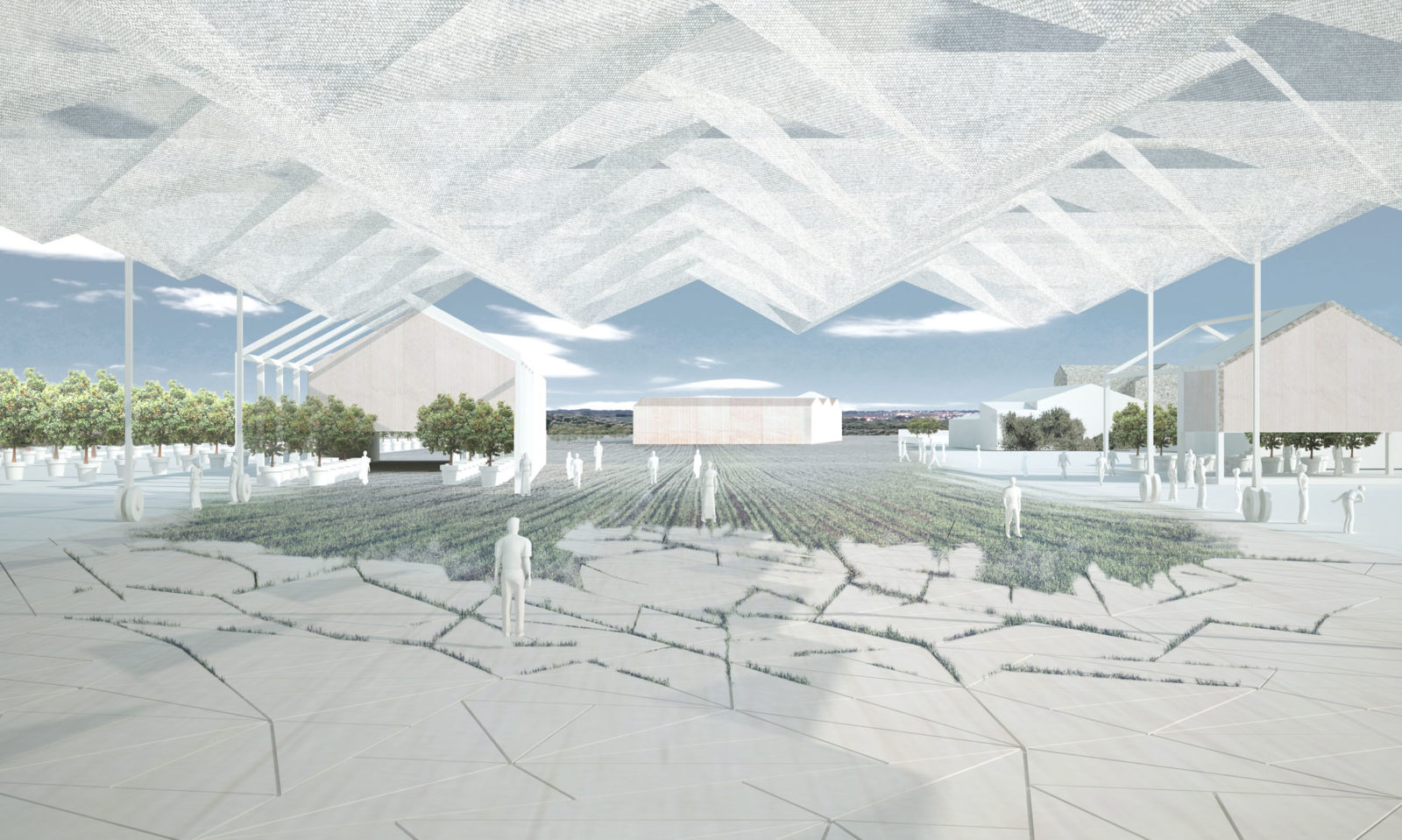 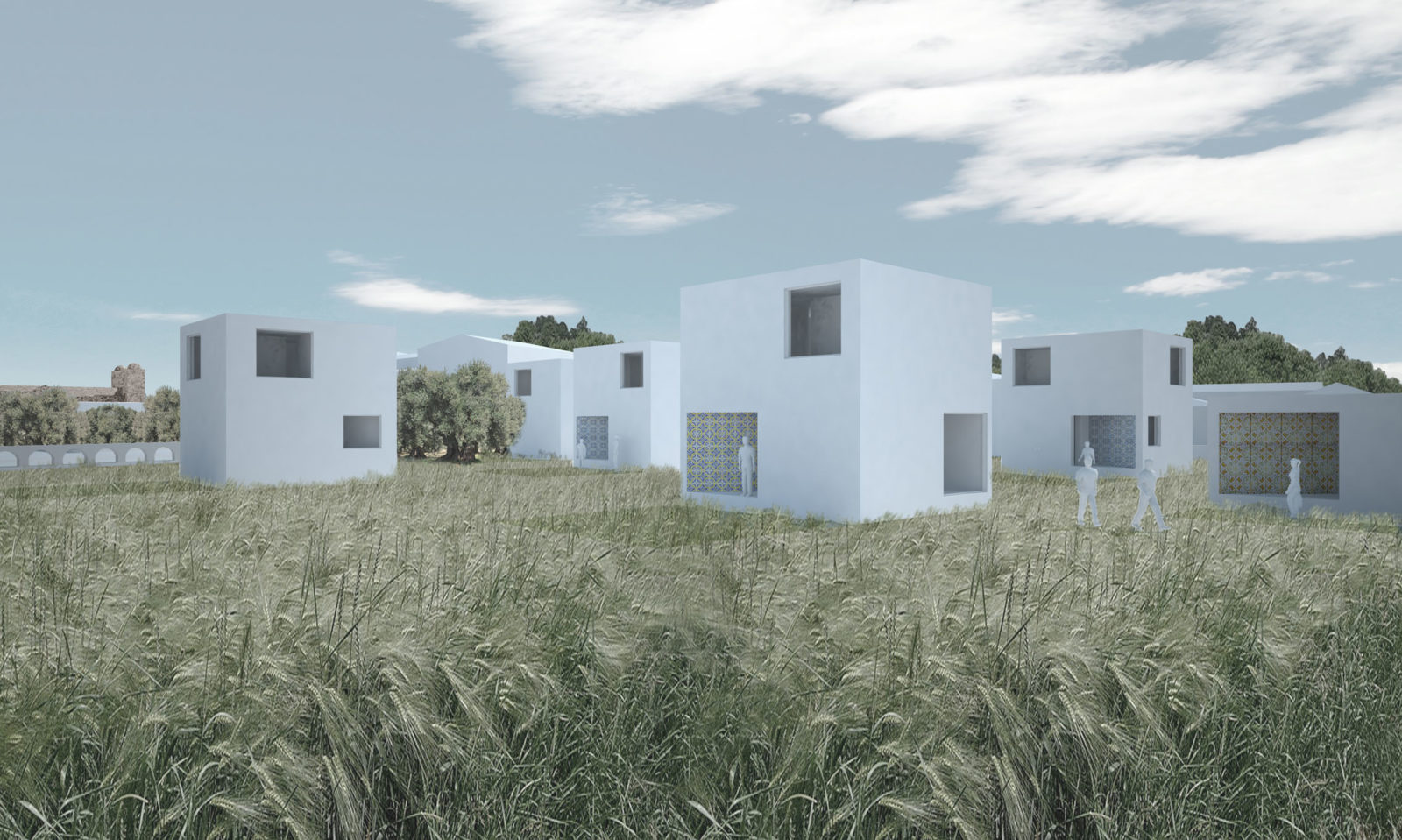 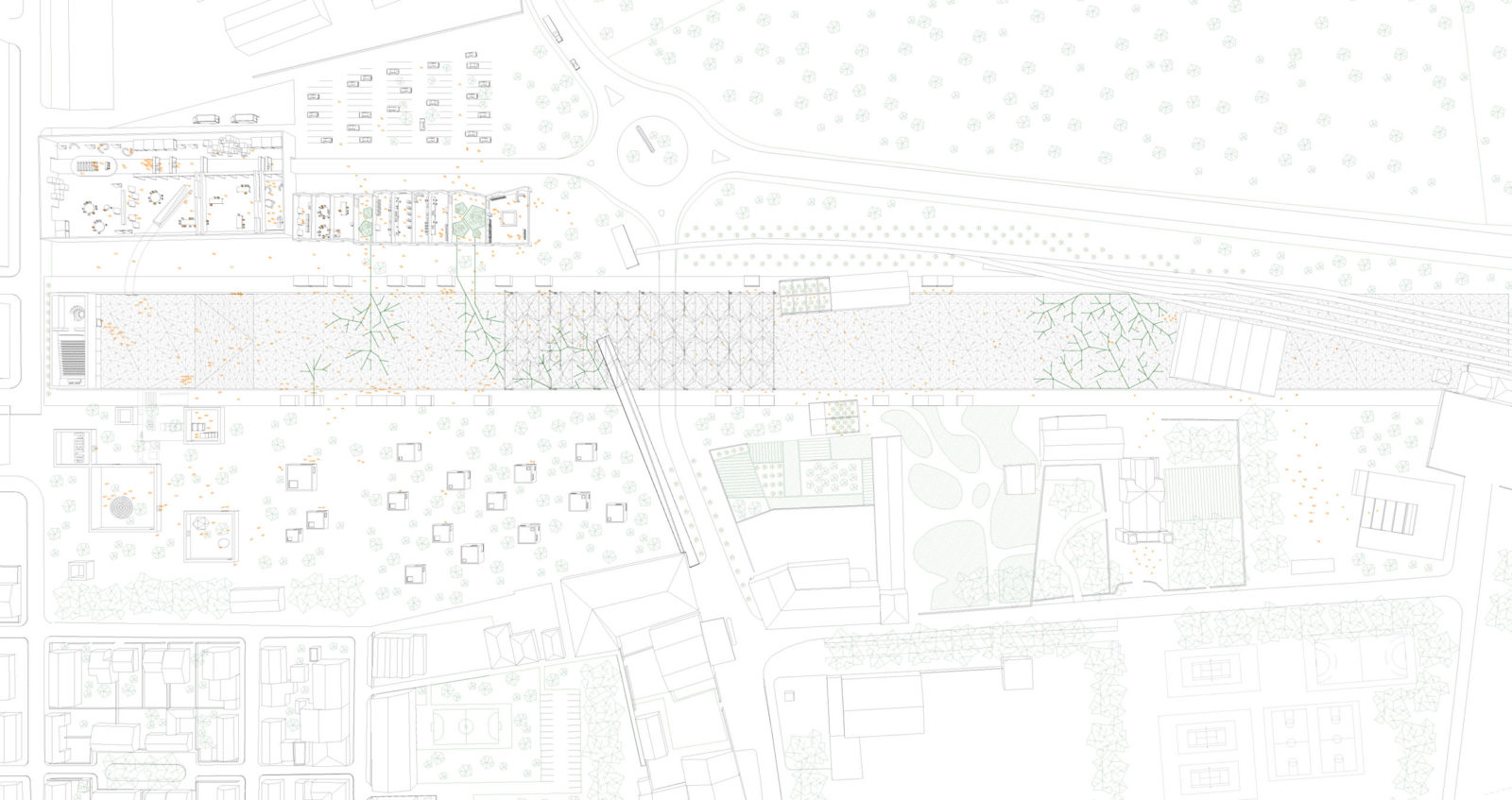 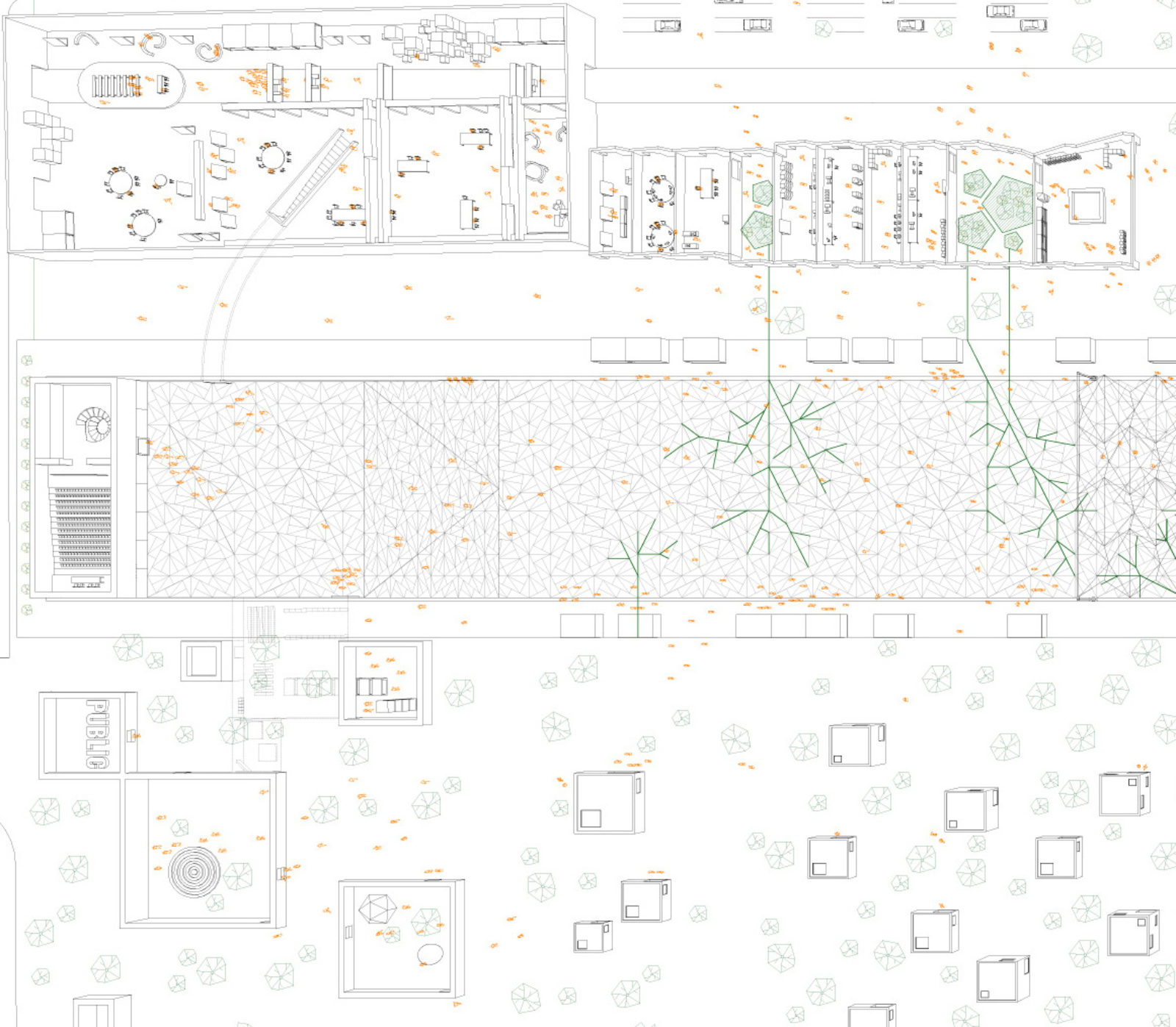 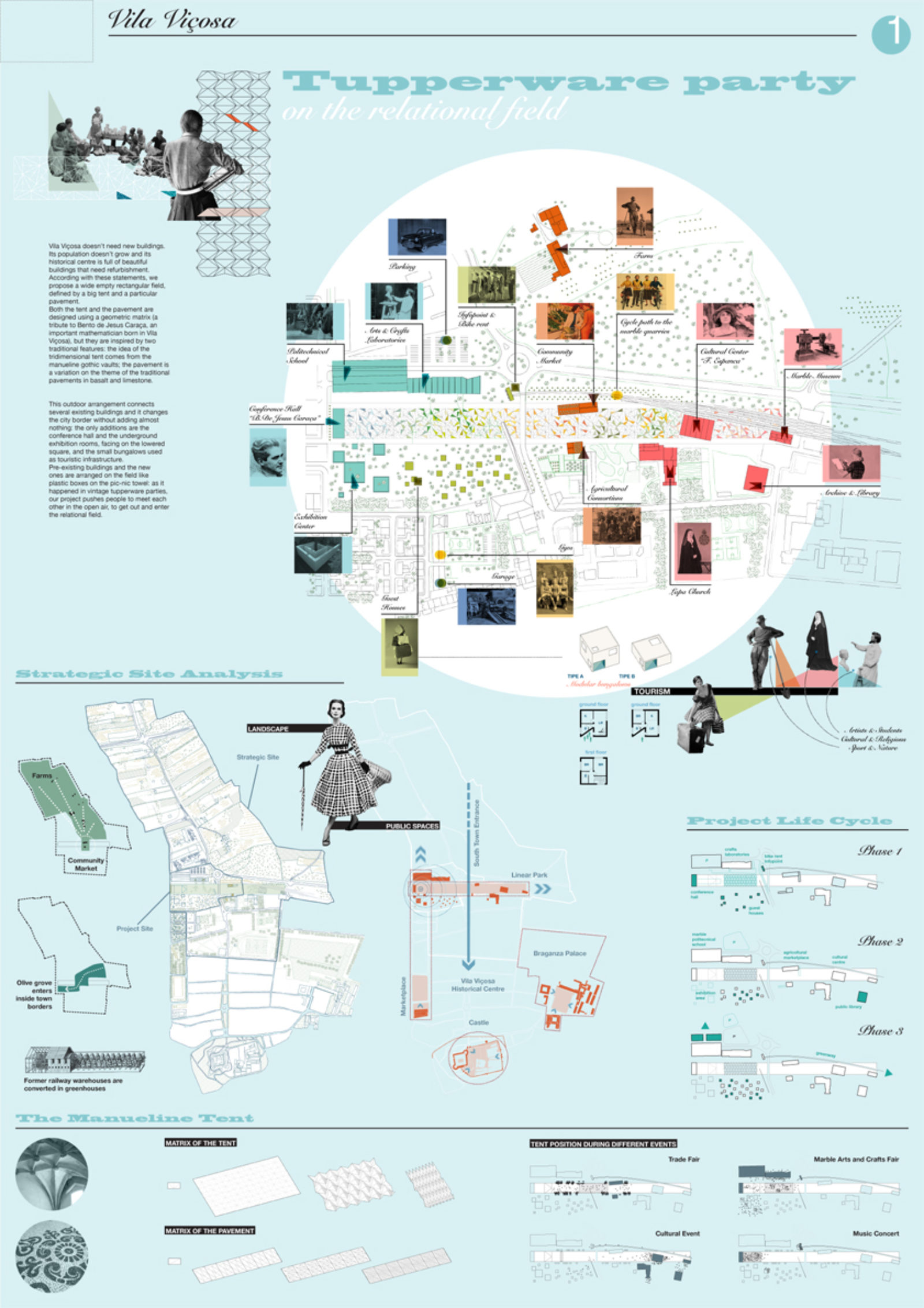 Vila Viçosa doesn’t need new buildings. Its population doesn’t grow and its historical centre is full of beautiful buildings that need refurbishment. According with these statements, we propose a wide empty rectangular field, defined by a big tent and a particular pavement. Both the tent and the pavement are designed using a geometric matrix (a tribute to Bento de Jesus Caraça, an important mathematician born in Vila Viçosa), but they are inspired by two traditional features: the idea of the tridimensional tent comes from the manueline gothic vaults; the pavement is a variation on the theme of the traditional pavements in basalt and limestone. This outdoor arrangement connects several existing buildings and it changes the city border without adding almost nothing: the only additions are the conference hall and the underground exhibition rooms, facing on the lowered square, and the small bungalows used as touristic infrastructure. Pre-existing buildings and the new ones are arranged on the field like plastic boxes on the pic-nic towel: as it happened in vintage tupperware parties, our project pushes people to meet each other in the open air, to get out and enter the relational field.

Contemporary age is the age of relations. Starting from the radical designers of the seventies, the image of the world as an endless field where there are no more buildings, but only interacting people, enter the realm of architecture. Today, the improvement of communication tecnologies points out the importance of relations in an economic and productive way. Social networks let people keep in touch even if they are phisically apart. Architecture has to challenge with them, providing new chanses of encounter in the real world. People meet in architecture, Kazuyo Sejima would say. Describing her first work in 1988, a weekend house called Platform I, the japanese architect said that she was looking for a new approach to the program: in fact she wanted to avoid the dicothomy between the separated “boxes”, in which programatic architetcure locks each action in, and the continuity of real human life. In the 2000s, SANAA often dealt with relational space and they worked closer to “relational artists”, as Nicolas Bourriaud called them in his important book “Esthetique relationelle” 1. Among these projects, “whose essence lies in fostering (not forcing) and exposing relational systems” (Florian Idenburg, “Relations in the architecture of Kazuyo Sejima + Ryue Nishizawa”, 2009) there was “Field Party”, which Sejima undertook with her students. They arranged one hundred barbecues in a field, with a 12m X 12m grid. Each node of the grid offered only one type of meat or beverage. This “project” of the field produced encounters between the inhabitants of the neighborhood.

The pavement and the big tent define a long rectangular park, connecting several existing buildings. These buildings are “reloaded”: thanks to this addition, they gain new functionalities. The old marble factory is transformed in a school for young marble craftsmen, designer and artists. Improving the local know-how to turn environment resources into wellness for the people and employment for the young ones is the only way out from the worldwide economic crisis. The former railway facilities are converted in the agricultural community marketplace and in greenhouses for orange trees. The rectangular park ends near the former railway station, now marble museum. In a way, the rectangular park becomes a sort of long, shaded, draining, green, changeable “praça”, with a south pole that deals with marble industry, a midpoint dedicated to agriculture and a northern pole characterized by cultural institutions.

The project site defines the border between the town and the country. This turning point is remarked by the pavement and the great linear public space becomes the place where the country and the town meet togheter. We propose to take the agricoltural landscape in, planting olive trees among the touristic residences. The project site becomes the starting point of a linear park dealing with the other designed parks of the town: the duke palace, the castle, and the marketplace. This linear park could develope in further steps along the dismissed railway lines.

The big tent is the core of the project: its tridimensional feature allows it to extend itself and compact itself as necessary. The tent is hung up to small overhead travelling cranes that move along two rails beside the pavement.In this way the tent can be used in different position shading different events, operating in synergy with the various preexisting buildings. 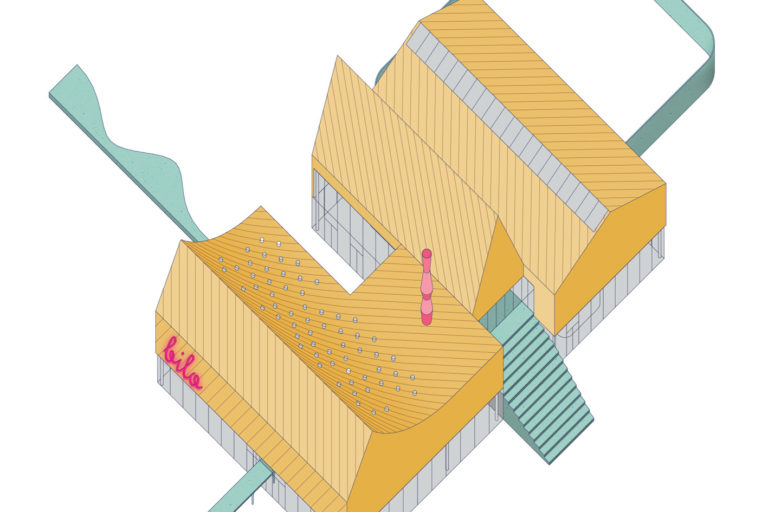 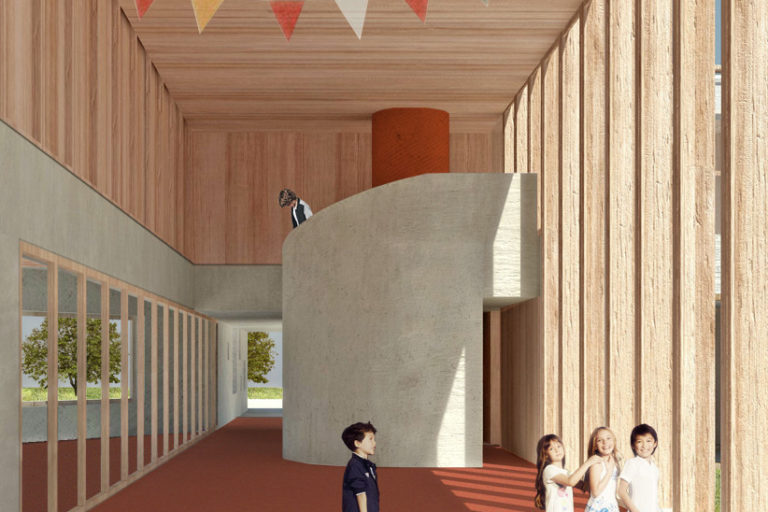 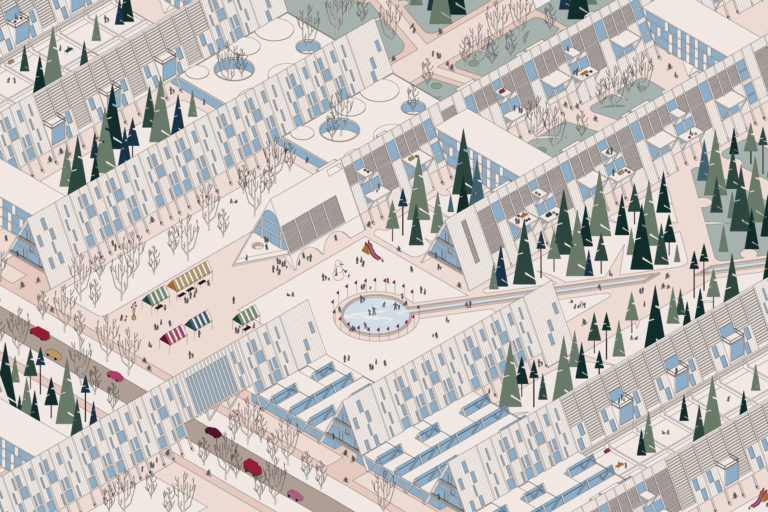